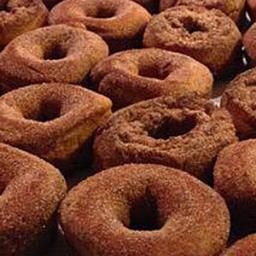 The Norfolk Fruit Growers’ Association has been selling the tasty confection at The Apple Place retail outlet at 99 Queensway East in Simcoe for many years. At the time of the declaration, about 70 dozen doughnuts were produced at The Apple Place every day – and the number has grown since then. 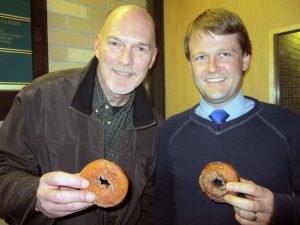 Gregg McLachlan, co-founder of the Tweet Folk Tours of Norfolk County, and Hayden Dooney, an NFGA manager, made the case for apple cider doughnuts. For the better part of 2015, reported the Simcoe Reformer, the pair had been stumping to have the apple cider doughnut elevated to official status.

“It’s a fun way to get people talking about Norfolk County,” said McLachlan, who advises clients on promoting their businesses and products on social media.

Dooney said this was an opportunity for Norfolk to go where no municipality has gone before.

“As far as we know, no other community in Canada has an official doughnut,” he said.

When Council was considering its declaration, some elected representatives were skeptical about taking such a big step. One councillor was concerned there might be a legal reason why council should deny the request by McLachlan and Dooney.

“If we do something wrong and someone has to go to jail, I will go to jail,” Luke said. “I have no problem sticking my neck onto the chopping block for this. If there’s something wrong with this, I will be happy to take the flak.”