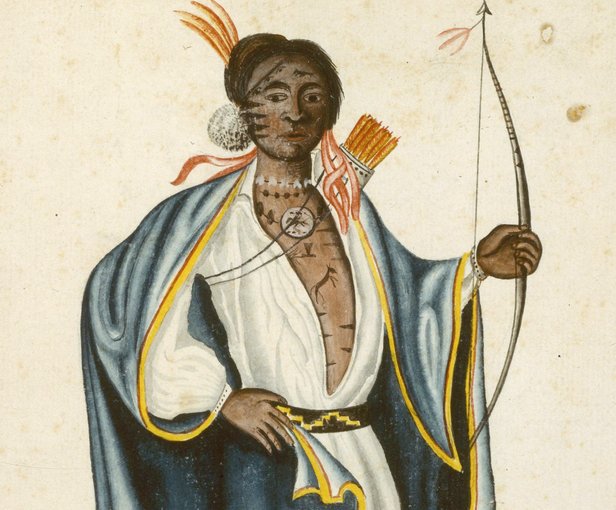 In the winter of 1668-69, François Dollier de Casson — cavalry captain, priest, Sulpician, military chaplain, explorer — went off as a missionary to the Nipissing First Nation (see warrior in photo) to learn the Algonkian language.

He spent the winter with a chief who owned a young slave, a native of the regions to the south. His enthusiasm aroused by what the slave told him, Dollier informed his Superior at the Séminaire de Saint-Sulpice in Montreal of the possibilities of evangelization among the “Ottawa tribes” in the Mississippi region.

Being anxious to open up new fields where the Sulpicians could carry the gospel, the Superior approved Dollier’s missionary projects.

Dollier then went down to Quebec to obtain the necessary permission from the civil and religious authorities and to prepare his trip and his stay among the Indians.

He “had made up his mind never to return [to Montreal] if he could find a tribe that would be willing to receive him.”

At the governor’s request, however, he agreed to join an expedition of the adventurous Robert Cavelier de La Salle.

But the Superior of the Sulpicians, who distrusted La Salle, replaced the person designated to accompany Dollier, Michel Barthélemy, by René Bréhant de Galinée, who had some knowledge of geography.