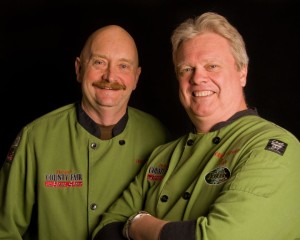 Dan Barker and Brian Reichheld are the two volunteers of the Norfolk County Tourism & Economic Development Division who promote Norfolk County food at events across Ontario, through dozens of cooking demonstrations on their days off.

They have voiced radio commercials promoting Norfolk County food which have aired across Ontario. The Fairly Fat Guys are named in homage to the “Two Fat Ladies”, the popular British TV food show.

The Fairly Fat Guys first appeared at Norfolk County FlavourFest in October 2005. They joke about their support group, HOCCI (“Husbands of the Culinarily Challenged International”), but it doesn’t really exist and has no newsletter. However, you can subscribe to Norfolk Flavours email news, which occasionally contains recipes by the Fairly Fat Guys.

Since 2004, Norfolk FlavourFest has been a partnership between Norfolk County Tourism & Economic Development and the Norfolk County Fair & Horse Show.

In its first year, FlavourFest began in the Recreation Centre Arena with collection of farmers displaying and sampling their products, a central cashier, and a demonstration stage.

That first year, Norfolk County Manager of Tourism & Economic Development asked radio personality Gerry Hamill, local amateur actor Larry Dawson, and friend Dan Barker to demonstrate on the stage how to make a local food dish. (Gerry’s water didn’t boil on the hot plate, and Dan resorted to a rubber chicken to explain his dish.) Next year, Dan returned with Brian Reichheld for food demonstrations, as the Fairly Fat Guys.

In 2015, the exhibit was renamed FlavourFest Farmers Market and moved to the Curling Building. More…