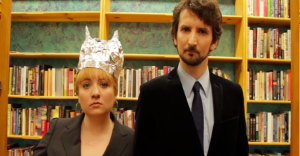 Film buffs will have the chance to meet the award-winning directors of two feature films showing at the Routes to Roots Film Festival (R2RFF).

ALBERT SHIN, the director and co-screenwriter of In Her Place, and GABRIEL DIANI and ETTA DEVINE, writers, directors and stars of Diani and Devine Meet the Apocalypse, will attend the opening of the two-day event scheduled for October 20-21, 2017.

Albert Shin is a second-generation Korean-Canadian. He graduated from York University in Toronto with a B.F.A. in Film and Video production in 2006. After graduating, Albert and fellow York Alumni, Igor Drljaca founded the production company TimeLapse Pictures. The company’s first production, Point Traverse [2010] was Albert’s feature debut, which played at numerous film festivals all over North America.

For In Her Place, Albert decided to return to the country of his parents’ birth to explore the possibility of making a Korean-language film. After many years of writing and research, the film was shot on location in South Korea and finished in Canada in 2014. In Her Place tells the story of a mysterious city woman taken in by a weathered woman and her odd teenage daughter on a rural farm in South Korea.

Gabriel Diani and Etta Devine are award-winning actors, writers, and comedians who are often compared with classic comedy teams like Nichols and May and Burns and Allen. They have performed at comedy festivals all over the country, raised over $30,000 on Kickstarter to replace the “N-word” with “Robot” in Mark Twain’s “Adventures of Huckleberry Finn,” and garnered over 1.3 million hits on their web series Mary Olson.

In Diani and Devine Meet the Apocalypse, a struggling comedy duo discovers that surviving the apocalypse is almost as difficult as surviving in Hollywood. When all power and communication systems mysteriously shut off, the unprepared couple pack up their things and hit the road in search of a safe haven to wait out the possible extinction event.

The organizers of R2RFF are pleased to host the directors at this inaugural film festival in downtown Simcoe, Norfolk County.

The Routes to Roots Film Festival is a showcase of local, national, and international film with an emphasis on themes of returning to roots, rural life, and connectedness. R2RFF has scheduled four feature films (also including Lamb, directed by Yared Zeleke, Ethiopia; and I Dream in Another Language, Directed by Ernesto Contreras, Mexico.) and two short film programs.