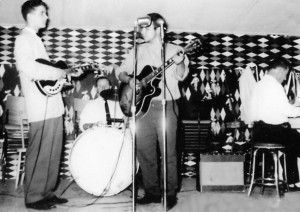 This route offers an excellent way to explore beautiful Norfolk County while appealing to fans of Mumford & Sons, Rick Danko and The Band, and fans of rock legends in rural Ontario.

Where it all started…

From the 1920s to the 1970s, famous musicians and bands (Chubby Checker, Louis Armstrong, Lighthouse, Rush)  performed at the dance halls of Norfolk County. Rick Danko, who grew up in Norfolk County and would later work with Ronnie Hawkins and The Band (video clip), started performing at many of these halls when he was in his teens.

This is also where Mumford & Sons held their successful 2013 Canadian stopover for the Gentlemen of the Road Tour. When the shuttle bus brought fans to the festival in downtown Simcoe, people stepped off the bus only yards from where Rick Danko spent much of his youth.

Simcoe is where Rick Danko attended high school briefly and worked as a meat cutter at Stan Makepeace’s butcher shop. Rick actually lived with his parents in the small crossroads community of Blayney, located in the countryside west of Simcoe on Norfolk County Road 1. 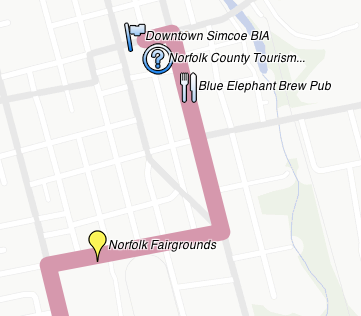 Simcoe was home to a few dance halls. Hillcrest Dance Hall opened in 1950 and the west side of Simcoe. Admission was 50 cents.  Eva Brook Donly Museum has a collection of photos from this period. Among the groups that performed here were Lonni & Lottie, Norfolk Mountaineers, Jack Kingston, Johnny Davidson and the Canadian Hoedowners, Bill Long and the Playboys, Wall Traugott and Kidd Baker. Hillcrest closed in the late 1960s. Another hall, Ruth’s Wayside Inn (on the east side of town) was active in the 1960s.

Downtown Simcoe is the location of the Gentlemen of the Road Street Fair. It is also home of the Blue Elephant Craft Brew House, which is producing special GOTR beer. Mumford & Sons and other bands will be performing at the Norfolk County fairgrounds, which is home to the Simcoe Farmers Market and the Norfolk County Fair & Horse Show (week leading up to and including October Holiday Weekend).

From Simcoe to Turkey Point

Turkey Point is a beach town that still possesses much of the party spirit of Norfolk County, back when dance halls were the source of entertainment. The Ken-Mar Dance Hall was the center of the universe in days gone by. It is no longer there, but the Turkey Point Hotel has a great patio where you can order lunch and drinks, and watch people of all ages, sizes and walks of life enjoying themselves on the beach. You can also golf at Turkey Point Provincial Park.

From Turkey Point to Long Point

Head west from Turkey Point past Long Point Eco-Adventures and Burning Kiln Winery. Cruise into Port Rowan, home of Twins Ice Cream Parlour, then turn south onto Hwy 59. On Long Point, the Highlands Dance Hall, according to local legend, inspired the construction of the Causeway Restaurant, which plans to reopen in 2014. According to Barbara, a Long Point resident, “Going to the Highlands on Saturday nights for the dances was the highlight of the week for us teenagers. Kids came from all over. Those were the days before TV when you made your own fun. We had a blast.” Stay the night at an area B&B or Long Point Provincial Park.

From Long Point to Glen Meyer 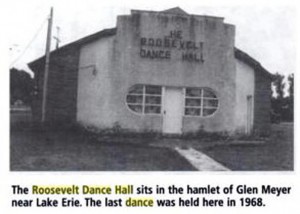 As you pass Sand Hill Park and venture into the lush farmland north of Frogmore, you will encounter the area made famous by the Roosevelt Dance Hall. Saturday night dances ran for 14 years, with strictly Country & Western music. Crowds up to 400 people came to enjoy the bands. “It was rowdy and loud and people had a great time as they celebrated the end of another week of hard farm work,” writes Peter Young in his book, Let’s Dance. The Roosevelt closed in 1968. Explore Goji Ontario for Chinese Wolfberries or Goji berries while in the area.

From Glen Meyer to Silverhill

Make your way deeper into Norfolk County (past Andy’s Drive In and Golden Leaf Estate Winery) and you will find the hamlet of Silverhill, which used to have a dance hall. Rick Danko played here, and at most of these halls. “I have fond memories of the Silver Hill dance hall,” Julie wrote on the Simcoe facebook page recently. “We always called it the Silver Slipper. I attended community showers for newlyweds as well as dances sponsored by local groups from the time I was very young.” As you pass through Courtland, check out The Market Garden, Courtland Antique & Collectible Warehouse and Country Home Candle.

From Silverhill to Delhi

Head next to Delhi, home of several cultural halls, including the German Home, the Belgian Club and the Hungarian Hall. The Delhi Belgian Club has hosted many bands over the years. In the 1970s, these included Max Webster, April Wine, Blood, Sweat & Tears, Bachman-Turner Overdrive and Rush. Among the locals, Teresa remembers seeing Chubby Checker. Patricia recalls Bobby Curtola and “loved his Little Girl Blue”. Yvette has memories of Jay and The Americans at the Belgian Hall back in the 1960s. While in Delhi, buy some fresh produce at Wholesome Pickins and browse local history at the Delhi Tobacco Museum & Heritage Centre.

From Delhi to Waterford

Venture north of Delhi (passing Ramblin’ Road Brewery Farm) through the hamlet of La Salette, where you will find La Salette Historic Church, a new concert venue in a heritage building. Then drive further east to Waterford and into its downtown core. You will find the Waterford Old Town Hall, which has an impressive line-up of entertainment year-round as well as works from local artists on display. The Waterford Heritage & Agricultural Museum also boasts amazing exhibits. While in the Waterford area, take a side trip north to Whistling Gardens and explore this new botanical garden.

From Waterford to Port Dover

Continue south from Waterford and you will come to Port Dover. By the beach is The Beach House Restaurant. Park your car, cross the street to Knechtels, buy a snack of Lake Erie perch, and have a seat in the sandy picnic area. You have arrived at “mecca” for Norfolk County musical history. This is the site of the former Summer Gardens pavilion, where Ronnie Hawkins recruited Rick Danko to join Levon Helm in his band. The younger musicians would eventually form their own group, The Band, known for songs like The Weight. Stroll over to Port Dover Harbour Museum on Harbour Street. Check out the exhibit about the Summer Gardens, and explore the rich heritage of commercial fishing and hospitality that Port Dover is famous for.

It is estimated that over 5 million people danced in the three Summer Gardens that were built and destroyed and rebuilt over the years. Musicians included Louis Armstrong, Count Basie, Gene Krupa, Ronnie Hawkins and The Hawks (including Levon Helm and Rick Danko). Manager Don Ivey, known as Pop, wore a signature white suit with a single red rose in his lapel. “On Sunday nights we played Pop Ivey’s ballroom for $250,” according to Levon Helm of The Hawks (later of The Band). “Someone taped our show one night … Richard Manual ends the show with a beautiful version of Georgia On My Mind.” The Summer Garden was torched by an arsonist in January 1979.

Other Routes: Check out other routes around Norfolk County.

You must stay overnight to fully appreciate Norfolk County. Our website offers contact info for hotels, motels and inns, B&Bs, cottages and campgrounds.

Norfolk County has many excellent restaurants and other eating establishments that focus on menus with local ingredients. Pick up groceries at roadside stands set up by farmers – see a full list at www.norfolkfarms.com.