In late 2012, word spread among economic development officials in the Province of Ontario that a famous rock band wanted to hold a concert in a small town. The search was on, and hundreds of communities vied for the opportunity. The short list was narrowed to a few places, and one of them was Norfolk County.

Early in 2013, two members of that popular rock band quietly visited Norfolk County. Winston Marshall and Ben Lovett of Mumford and Sons arrived at the Blue Elephant Craft Brewhouse, where they were greeted by Norfolk County officials. After a bite to eat and a pint of local beer, Ben and Winston were shown the brewing area, and assisted in making a batch of beer by adding the hops to the mix.

They also walked by the shops of downtown Simcoe and envisioned the carnival atmosphere within the setting of heritage buildings and storefronts in the town. 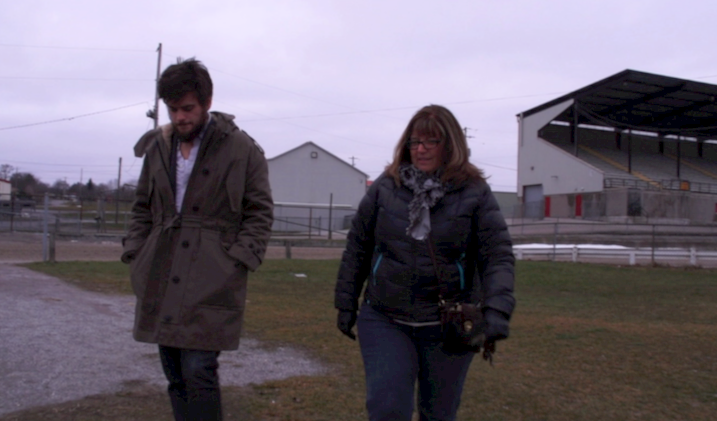 They checked out the concert site

Ben and Winston and their colleagues toured the Norfolk County Fairgrounds (where the Gentlemen of the Road Simcoe Stopover was eventually staged on August 23-24, 2013) and reviewed how the site would be set up.

They kept their fans in mind as plans for the event were discussed. It was clear that the guys want to make sure that everyone who attended would have a great time.

Their tour meandered through the countryside and farmers’ fields of Norfolk County. Ben and Winston were impressed how the area has diversified its agriculture into ecotourism and wineries. They checked out the zipline, observatory and wilderness suites at Long Point Eco Adventures, then stopped at the Burning Kiln Winery for a reception. 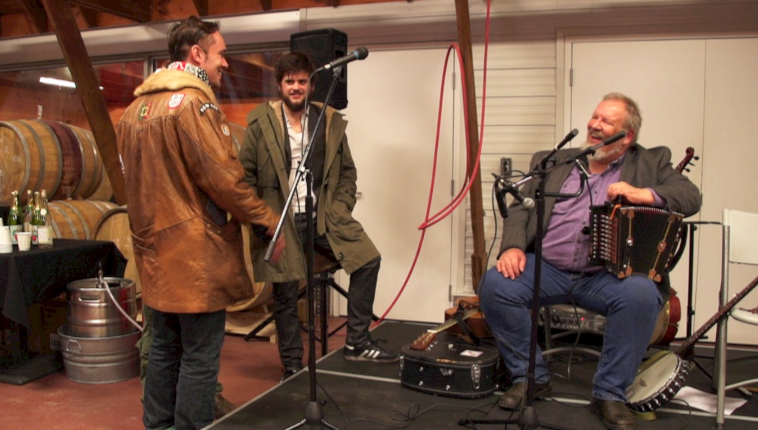 Ben and Winston met many of the down-to-earth people who live in Norfolk County. They tasted our home-grown food. We showed them our hospitality and assured them we would make their fans feel welcome.

We reminded them Rick Danko grew up here

Norfolk County is no stranger to musical talent. Rick Danko grew up in Norfolk County, had his own band and met Ronnie Hawkins at the Summer Garden dance hall in Port Dover in the late 1950s.

Rick eventually formed the roots rock group The Band with American Levon Helm and Canadians Richard Manuel, Garth Hudson and Robbie Robertson. They became famous and performed songs such as The Weight and Up on Cripple Creek.

Martin Scorsese’s 1976 film The Last Waltz documents their success. The multi-part harmonics of The Band’s vocals are called the ‘Simcoe sound‘, according to producer Daniel Lanois.

It was thumbs up!

The folks from Norfolk County who had the honour and pleasure to spend some time with Winston and Ben were proud to showcase their community. Everyone was impressed with the humble, friendly approach these famous guys took as they met with us. Something clicked, and a few weeks later, Mumford & Sons announced that Norfolk County would host the only Canadian stopover in the 2013 Gentlemen of the Road Tour.

The concert was an unmitigated success. Thousands travelled to Norfolk County from miles around to see Mumford and Sons, and to experience our community. Thank you, guys!

Walk in the footsteps of Mumford and Sons …

Memories of the “Gentlemen of the Road Simcoe Stopover”

Gentlemen of the Road Simcoe Stopover Sights and Sounds (1:51)

Why did Mumford and Sons’ choose Norfolk County? 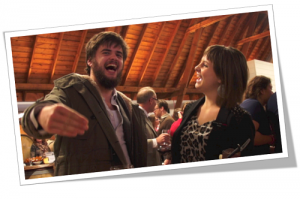 “It was the people – absolutely – it was the primary thing. Everyone was really engaging, smart, fun, and passionate … there’s a lot of passion in this County. A lot of it. In everything: the beer, the tobacco, the wineries, the breweries, the hotels, the restaurants. People are really proud of this place, and that’s what we want. We like that. There’s something about that that’s really magnetic.”
– Winston Marshall, Mumford and Sons

MORE ROUTES: Walk in Footsteps of Rick Danko of The Band