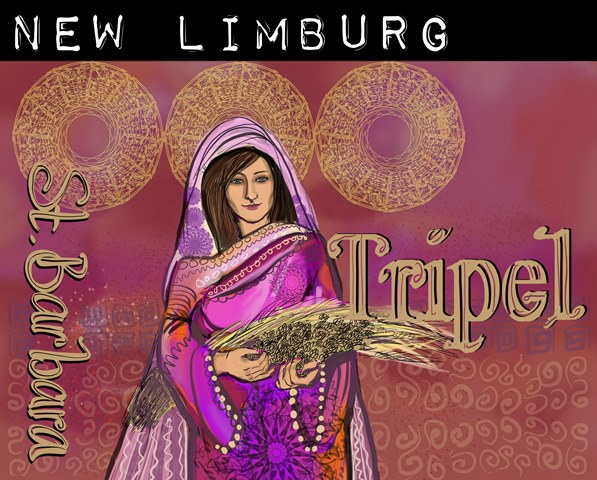 The tripel is a Belgian Style which originated in the Trappist monasteries of Belgium. Strong, golden-coloured ale – easy drinking despite its strength (9%) and features an aroma of spice mingled with a generous yeast character, balanced by a slight malty sweetness and generous carbonation.  The ‘Tripel’ is currently part of a trilogy of beers that New Limburg considers their “Trappist Lineup”.  The others are Dubbel and Quadrupel, which are darker beers of 7% and 10.5% respectively.  This lineup honours the tradition of Belgian brewing most ardently, seeking to emulate beers that are truly world-class.  The labels on each of these beers feature a different Flemish saint who was known for some contribution to beer or brewing. The Tripel depicts St. Barbara humbly offering barley grain.  The artwork, created by Yvonne Moonen (Geven) one of the owners of New Limburg, and in-house graphic designer.

New Limburg strives to produce outstanding Belgian beer in the most authentic way possible, so winning gold for their Tripel represents a validation of hard work and commitment to tradition.  Earlier this spring, at the Ontario Brewing Awards, Belgian Dubbel won GOLD and Belgian Wit won BRONZE.  In the Great Ontario-Hopped Beer Competition, Belgian IPA won FIRST PRIZE.  This latter competition pairs local hop producers with Ontario Breweries and asks them to produce a given style each year.

Visit New Limburg Brewery and try some of these great tasting beers!  Patio is Open!