Frank De Leebeeck is a third generation Norfolk farmer.  His grandfather emigrated from Belgium in 1948 and began growing tobacco here in 1950.  Frank and his father worked that land together until, in 1982, Frank bought what is now his home farm, 132 acres on Charlotteville Road One.  Eventually he amalgamated the two farms.  Then, in the year 2000, Frank purchased the tobacco farm formerly owned by Alfonse Jansen on the Front Road, where a vineyard and Burning Kiln Winery now stand.    Along with 140 acres of rented land he now has a total of 340 acres under cultivation. 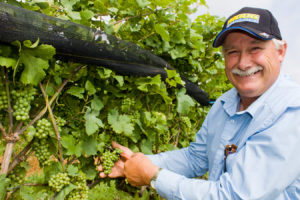 Frank and his wife Chris were married in 1976.  She retired from her teaching career in 2011.  In spite of a demanding profession, Chris raised three children, two sons and a daughter.  She kept the books for the farming operation, helped with work like planting and hoeing, and still managed, Frank says fondly, to “always put a hot meal on the table every day”.

The De Leebeeck children, Kevin, Danielle and Matthew, are grown now and established in lives of their own.  None are farmers, although Matthew shows some interest.  Frank says he and Chris “directed them away from farming”, mostly because of the high cost of becoming established on the land.

There is another generation coming along.  Kevin and his wife have a very new son, born on July 18, 2014.  Danielle’s daughter is 8 months old.  Tragically, she and her husband lost their first infant after only ninety days of life.  Frank is proud and happy to be a grandfather, and because of the family’s earlier loss treasures these little ones the more.

Frank began as a tobacco farmer, eventually expanding into corn and soybean production.  When he became aware that “tobacco was on the way out”, at least on its former scale in Norfolk County, he began growing Napa cabbage.  He continues to produce those crops, along with flat cabbage, for someone who has it shipped to New York and markets it there.  It’s interesting to think of residents of New York City enjoying cabbage grown right here in ‘Ontario’s Garden’.  Frank sold his last pound of tobacco in 2008.

Not long after Frank had purchased the Front Road property, Mike McArthur, now one of Burning Kiln’s partners, mentioned to him in conversation he’d learned from his grandfather grapes were once grown on that land.  Frank was intrigued.  On investigation Tony Shaw, a professor at Brock University, determined the farm could, in fact, support cold-climate viticulture.  The soil was good for grapes.  Three years of collected data found the average temperature here is actually a half-degree warmer than Niagara.   That was all Frank needed. Believing that “if you see an opportunity, take it”, he agreed to produce grapes for a proposed winery, and became a partner in the venture.  In 2009, he also agreed to a boundary adjustment in order to accommodate the winery facility.

The first 8 acres of grapes were planted in 2007.  There were only three varietals to start:  Cabernet Franc (in his honour, Burning Kiln styles it Cab Frank), Chardonnay and Riesling.  Today he grows four additional varietals:  Pinot Gris, Sauvignin, Gewurztraminer and Merlot.  Frank now has a total of 26 acres in grape production, on two separate tracts of land.  These grapes are used to make all the fine Burning Kiln wines, supplemented with fruit from Niagara only when absolutely necessary, thus allowing the wines to be designated VQA.

His latest venture has subjected Frank to “a big learning curve”, he says.  While the basics of good farming practice and crop management still apply, each crop has its own requirements.  Those of grape vines are very specific.    Frank credits help and advice from many sources along the way.  He singles out two for particular mention:  Lloyd Schmidt, who provides his root stock, and Kevin Kerr, whom he consults as needed.  Frank is happy to be able to have access to their experience and all the newest knowledge.  He says, “New wineries like this one are able to progress faster because they are able to build upon the experience of the older producers”.

To keep on top of all his crops on such considerable acreage Frank depends on the help of eight off-shore workers, all from Jamaica.  The same men come back each year, specifically requesting to work for him.  Fillmore, his lead hand, has been with him for 23 years.  Frank describes his crew as “personable and hard-working”.  He says he considers them “part of his family”, and clearly treats them as such.  Frank believes that successful employer-employee relationships are built upon “respect”, and it’s apparent he puts his principles into practice.  As a result, he says, “they are behind me 100%” in carrying out the work that must be done, often going above and beyond what is required.  All are housed in a comfortable bunkhouse on the home farm.  And of course, as has been previously mentioned, wife Chris is also an indispensable part of the farm’s operations.

At the top of Frank’s list of what he considers his greatest successes is his fine family.  He and Chris raised their children to “face life’s challenges” and to “respect others”, and are proud of the adults they’ve become.  He also cites as success “when I sold my first tobacco and realized I could make a living doing what I wanted to do”.  Last but not least, he says, was the excitement of seeing the first vintage come off his vines.

Success does not come without tough challenges.  Frank must first contend, like all farmers, with the vagaries of weather.  First, there are the extremes of wet and dry.  Fortunately, the deep root systems of the grapevines combined with his sandy loam soil tend to retain sufficient moisture to pull them through dry spells with only minimal irrigation.  Then, of course, there are the periods of extreme heat and cold.  The colder than usual winter of 2013-14 was particularly hard on grapevines, and Frank’s were not exempted.  He remembers too well the nights he rose from his warm bed in the middle of the night, in minus 20 degree celsius temperatures, to go out to the vineyards to start the wind machines. Increasing air movement can raise the temperature by up to five degrees, but that’s not much help in such extreme cold.  As a result, some vines were lost.  Frank considers his grapes his “babies, and has difficulty not viewing any such losses as personal failure, but he says that in the end it’s important to him “to do the best you can do so you can honestly say you’ve done everything you could”.

Grapes, same as other crops, are subject to various pests and diseases, some unique to viticulture.  Birds, deer, wild turkeys and racoons all love a meal of grapes.  Even bees, usually of great benefit to farmers, become a problem once the fruit ripens.  They pierce the skins of the grapes and siphon off the sweet juice, rendering them unusable.  On the bright side, however, he says, “When the bees gather in the vineyard I know it’s time to harvest”.

On top of all his other challenges, Frank must contend, again like other farmers, with the large expense of purchasing any specialized equipment he requires. Luckily, he, like many of his fellows, has the necessary skills to adapt and modify existing machinery to suit some purposes, and that helps.

So, in spite of all this what keeps him going?  Frank is obviously a man who thrives on the challenge of learning new skills.  He’s a hopeful, optimistic persistent (not to say stubborn) person by nature, and believes “things normally come out alright, even if there are a few hiccups along the way”.  He was taught by his father – and has taught his kids – that in the face of difficulty or failure you “pull yourself up by your bootstraps and start again”.

Frank believes “there will always be agriculture in Norfolk County”.  “The soil here will grow anything if it’s properly nurtured”, he says.  He is firm in his faith that “if you look after it (the soil), it will give back”. “People here are never going to starve”.  In his opinion, the movement toward local/seasonal food purchasing on the part of consumers has been an important recent development for farmers.

When it comes to government policy, Frank is not alone in stating that all the rules and regulations they are subject to make things difficult for growers.  “If they would only make it easier for farmers to earn a decent living doing what we’re doing, we wouldn’t have to cry to the government for help”, he says.  On the other hand, current Ministry of Agriculture and Food campaigns such as “Know Where Your Food Comes From” and the Foodland Ontario ads, are helpful, he thinks.

The more educated people are about the importance of agriculture and the challenges faced by Ontario’s farmers, the better.  “If anyone thinks farming is easy”, says Frank, “why aren’t they doing it?”  He has consulted to the Research Station in Niagara and has seen many enthusiastic, ambitious young people who want to farm, but “a young farmer nowadays is facing a challenge” in terms of finding and/or affording land on which to grow things.

The success enjoyed so far by the young Burning Kiln Winery can be attributed to many things:  a group of committed partners, passionate about good wine; a dedicated, knowledgeable winemaking team; good management and enthusiastic staff; a beautiful, state of the art facility.  Crucial to all of that is an experienced, intelligent farmer, who knows how to grow excellent grapes.   Moreover, Frank’s experience as a tobacco cureman has served him, and the winery, well.  That experience and six tobacco kilns allow Burning Kiln to employ the appassimento technique (used notably for Italian Amarones), to dry grapes to produce superior wines.  Grapes are air-dried in the kilns, and Patti Fixter, the assistant wine-maker, monitors them and lets Frank know when the brix (sugar level) is just right.  “Magic happens in there (the kilns)”, Frank says.  Karen Matthews, Director of Winery Operations for Burning Kiln, is adamant that “Frank is an integral part of our winery.  He not only grows the grapes, he helps with bottling, works directly with the winemakers, and is totally responsible for the appassimento technique which makes our wines distinct”.  Frank has gotten something out of all this, too.  Grape vines take four or five years to mature sufficiently to produce fruit suitable for good wine, and “growing grapes has taught me patience” he states firmly.