All information is subject to change. 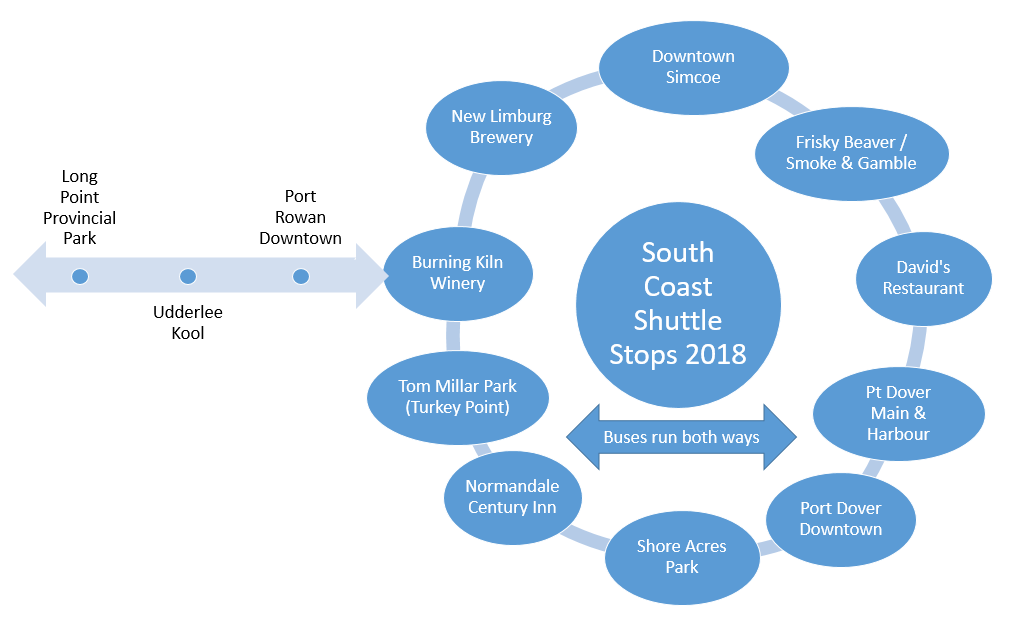 What is the route?

Saturdays and Sundays from May through September 30, 2018.

What time of day?

During peak periods, a bus would pass by each stop at least once every 90 minutes or so.

The service would be an expansion of current Ride Norfolk service, which is a municipal transit service operated by the municipality of Norfolk County.

How can a business become a sponsor?

Sponsorship opportunities have been established for businesses and organizations to make contributions. Sponsors at the $1,000 must be Norfolk County Marketing Partners. Contact Ride Norfolk to sign up for future service operations: 519-426-5870 ext 2275. Sponsors receive several benefits, depending on the level of sponsorship. Benefits include signage on the bus, recognition on signage, recognition on Norfolk County Tourism promotional tactics, volumes of ride tickets, the benefits of the service would be to increase traffic along the route and provide more reasons for visitors to stay in the area longer, spending more money. The service would increase awareness of businesses and amenities along the route.

Who is organizing this project?

The original shuttle service proposal was developed by a team of volunteers, including local business owners and representatives of local government and other agencies. Norfolk County’s Tourism & Economic Development Division acted as the facilitator for the founding year of the project. Now that the service is part of the Ride Norfolk operation, Norfolk County Community Services staff coordinate the service.

How much will it cost to ride?

Ride Norfolk fares would be in effect (one way, in town $2.50, out of town $8). See fare information here. However, sponsors of the service may be offering free or discounted fares as promotions. In some cases, passengers may be able to ride at no charge.

Who can use the service?

Anyone can use this service. It is not restricted to any particular group. Local residents, tourists, employees of businesses along the route, seniors, young people — all are welcome to use the service.

Have any routes been added?

In the service’s first year of operation (2015), the route connected Port Dover and Long Point. In the second year (2016), a route connecting Simcoe with the coastal routes  was added. Additional route extensions may be considered in the future.

How is the service funded?

The service is funded by provincial gas tax rebates provided to the municipality of Norfolk County. The service is also funded by private-sector sponsors who fund part of the cost of service. Fares also contribute to paying for the service.