The  most popular tourist attractions of Norfolk County (pop. 64, 044) are the ports, towns and villages along Lake Erie, known as Ontario’s South Coast. These towns include Port Dover, Turkey Point and Long Point. Fishing is another key attraction for tourists, as well as birding, hiking, camping and cycling. Agri-tourism is another expanding attraction for tourists coming to Norfolk County, with wineries and microbreweries, and farm-related events.

The jewel of Ontario’s South Coast: originally known as Dover Mills, Port Dover is named for a southern sea port in England, located on the River Dover. During the War of 1812, invading American forces burned Dover Mills, as were many mills throughout Ontario. More… 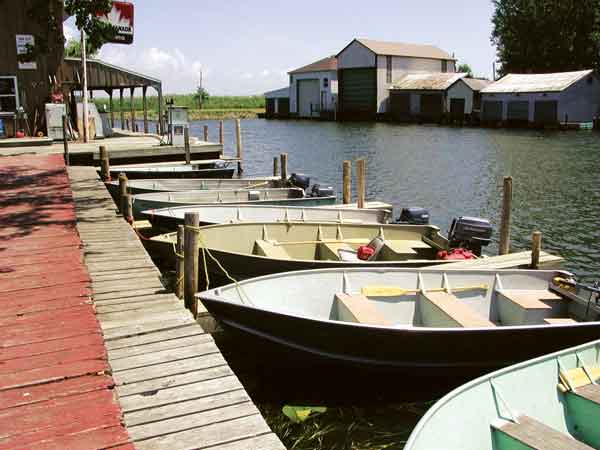 The name Long Point is the descriptive name given to the ever-shifting sand spit jutting out into Lake Erie. While the tip of Long Point (as well as most of the wilderness east of Long Point Provincial Park) is accessible, the resort community of cottages closer to the causeway has been a tourist destination for generations. More…

Other towns and villages…

Settled before 1802, Boston had been called Culver Plains for the many Culvers who lived there. Innkeeper William Kitchen owned land there and named it for his former home in Bloomsburg, Pennsylvania.

Established by Charles Booth as marina in 1957, the community of Booth’s Harbour developed around the popular marina.

Possibly named for Boston in the U.S.or for a town in England, the hamlet was established in the first decade of 1800s. The federal government tried to rename it Boylston and confusion in the mail system with the U.S.city resulted in a brief renaming to Shawmut in 1895, but the name of Boston was again restored.

Originally called Laycock Settlement for a family who lived there, around 1877 John L. Buck and Thomas Chamberlain named it Cultus for the cultured class of people there.

Delhi was originally named Sovereen’s Corners, then Fredericksburg, after Frederick Sovereign, who settled the area in the early 1800s. The name was changed to Delhi in 1856. With the arrival of the railway and post offices to rural Ontario, a number of similarly named towns brought the change of many town names to capital cities of various countries. More…

This unofficial crossroads east of Port Dover at the intersection of Highway 6 and Mill Road was named for a tavern established by William and Tamar Furlong about 1851, where a dog kept a nest under the front stoop for years. It was still marked by road signs until the 1990s, but persistent thefts of the signs left roads crews no choice but to leave them down.

Fairground was the seat of the former Houghton Township, named for Houghton St. Giles near Norwich,Norfolk County,England. The Norfolk County Fair & Horse Show (now held every October in Simcoe) got its start in here in 1840, which gave rise to the hamlet’s name.

Named for Frogmore near Windsor,England, the burial place of Queen Victoria, the hamlet is located in the rich agricultural countryside of Norfolk County.

Developed in the 1870s, Langton was first called Boughner’s Corners for David W. Boughner, who lived there, then named for a Langton family in England when the post office was established in 1862 by Henry J. Killmaster. The farms around Langton boast Norfolk sands, making the growing of horticultural crops and tobacco very popular. Annual events include one of the longest running one-day fall school fairs, showcasing youth and adults alike. Deer Creek Conservation Area is located nearby, and so is Golden Leaf Estate Winery.

Named for the famous shrine in France, the hamlet is home of a beautiful Historic Church.  Established in 1875 when the Port Dover & Lake Huron Railway crossed the Canada Southern Railway and was originally known as Port Dover Junction, the name was changed when the Post Office was opened on July 1, 1877.  The Historic Church and school house are now community owned.

Named for Baron Thomas Graham Lynedoch who served in Vittoria, Spain under British Lord Wellington, Lynedoch was briefly named Falkirk in 1853, but now carries its original name. The hamlet is home to beautiful natural scenery and heritage homes. Ramblin’ Road Brewery Farm is nearby.

Named for Joseph Van Norman who led a partnership to purchase iron works begun by Samuel Mason on Potter’s Creek in 1822, Normandale is the location of a historical marker for the Normandale Furnace. In the first half of the 19th Century, Normandale was home to over 750 people. Stoves, pots, plans and plough shares were among the products produced by the forge until it closed in 1847. The hamlet today boasts beautiful heritage homes and gardens.

The village of Port Rowan was laid out by William and Jeremiah Wolven and James Ellis in 1825. When the post office was established, the village was named for Captain William Rowan, secretary to Governor Colborne, as was the River Rowan, now known as Big Creek. More…

This small port grew around the mills built by Colonel Samuel Ryerse in the late 1790s. It provided a small thriving shallow-water port inNorfolkCounty’s lumbering heydays of the 1860s-1870s, but fell into decline when bypassed by the railway in the 1870s.Today Port Ryerse is a quiet refuge for boaters, anglers and beach bums.

Originally called Gibson Station for William and David Z. Gibson who operated a sawmill nearby, this hamlet is officially named Ellaton for William Gibson’s daughter. For some reason, the hamlet was unofficially renamed Rattlesnake Harbour in the 1990s, and shouldn’t be confused with the actual harbour of the same name in Georgian Bay.

James Renton lent his name to this hamlet when he purchased it in 1857. Once called The Grindstone after a tavern there, Renton is located at the corner of Hwy 3 and Cockshutt Road, and is popular among motorcyclists taking the back way to Port Dover from Brantford.

This hamlet is the site of an early unsuccessful search for silver and as such was named by 1854 when Jas. W. Schram kept a hotel here. Boaters on their way from Hwy 3 to their Lake Erie marinas will often pass through this town.

The main market town of Norfolk County, Simcoe has a bustling downtown retail core and numerous shopping opportunities. Simcoe also has a beautiful park system and fairground which plays host to festivals throughout the year. More…

Known as Neal’s Corner’s in the early 1800s for Rev. George Neal, it may have been later named for William Gillaspy, the “saintly” owner of property locally, who began severing village lots in 1832. Today, St. Williams is a small hamlet with a vibrant community spirit.

In 1855, George Teeter purchased this land and built a saw and gist mill. He laid out the village in 1859. When the post office was established in 1862 the village was renamed Blakeston, in honour of Edward Blake. However, the townspeople were less than impressed with this change and, two years later, won the battle to reclaim the town’s former name. In September 1864, a tree stump was burned at the four corners of Teeterville to represent the burning of Blakeston. Today the hamlet is home to the Teeterville Pioneer Museum, which is open in the summer months.

Settled in 1793, Turkey Point was named for the vast number of wild turkeys that are native to the area. More…

First called Tisdale’s Mills for the family’s grist mill on Young’s Creek, Walter Anderson began severing lots for the village by 1814.Vittoria was the district capital from 1815 to 1827, hosting courts and registry offices. The first post office County opened there in 1816, and was named Long Point. The town was named in 1818 for Vittoria, Spain, the town Wellington was victorious over Napoleon’s forces. Today, Vittoria is said to be “home of 500 nice people and one old grouch” and boasts a deep community spirit. Today, ironically, Norfolk County’s council and management teams periodically meet in Vittoria, due to its meeting facilities and central location. 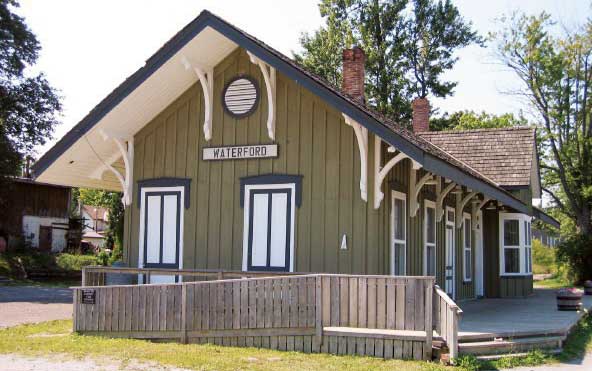 Until being officially named after the County seat in Munster Ireland in 1826, the town of Waterford saw many name changes: as the owners of the mills in town changed, so did the town’s name: Avery’s Mills, Sayles Mills, Sovereign’s Mills, and then later Lodorville.  More…

Wilsonville is named for Rev. James Wilson who lived there from 1835 and builtNorfolkCounty’s first steam mill in 1846. Today, this quiet hamlet provides an excellent environment for local residents. Whistling Gardens, a privately operated botanical gardens and garden centre, is open to the public, just east of Wilsonville.