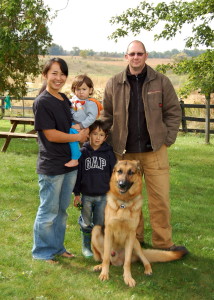 WHAT: Produce and Protein

Cambridge born and bred, Ken Norton has had a varied career which he believes has followed “a natural progression”.  He was a chef for over ten years in the Cambridge/Kitchener area.  After that he was employed for two years with the Canada Food Inspection Agency, before moving to Japan and working as a consultant on North American business practices.  His time in Japan changed his life.  He met his wife, the former Yuka Yamaha, a teacher.  Yuka became a permanent resident of Canada in 2009, and the couple now have two beautiful boys: Wayne, who is five years old, and Robert, eighteen months.

While living in Japan, Ken came to share the Japanese appreciation for fine food.  People there are, he says, “big foodies”.  They care about what they eat and they demand high quality. Returning to Canada he came back to, as Ken calls it, “supermarket food”.  He and Yuka were disappointed in both the quality and the taste, so they began growing as much of their own food as they could.  On 1½ acres they grew vegetables and raised chickens, providing not only food for their own table, but a surplus for market.

The Nortons purchased their 22-acre property in the north east corner of Norfolk County in 2013 and have established a mixed farming operation.  Although without official certification as such, their farm follows 100% organic methods, run on principles of “natural, local, sustainable” agriculture, or “permaculture”, as Ken prefers, referring to “things that grow back”.   Consistent with their aim of sustainability, they heat their 1850s farmhouse with an outdoor wood-fired furnace.  The furnace heats water which is circulated through underground piping and provides them with winter warmth.  They are able to produce most of their own food, with plenty left over to market.

Yuka and Ken grow vegetables and perennial fruits and berries, and rent an additional 250 acres nearby where they grow hay for bedding and feed. They raise turkeys to the age of 16 to 17 weeks, which they sell at Thanksgiving and Christmas.  There are also Muscovy ducks, and a sizeable flock of chickens.  Eggs from the chickens and the ducks are for sale at the farm.  The farm is also home to pigs and cattle, as well as three llamas and a dog named Alfie.  They refer to their llamas as “watch llamas”.   They can be fierce, and are penned with the calves to serve as protection from possible predation by coyotes.

All range as freely as possible.  Although the turkeys are fed non-GMO grains and garden waste, they also eat grass and worms as nature intended.  The same is true of the ducks and chickens, which are on grass from two weeks of age.  Shelter is provided for the ducks and turkeys allowing them the freedom to wander in and out at will.  When they were kept under the same conditions, however, an owl was preying on the chickens.  They now live in mobile “chicken tractors”.  As the birds deplete an area of grass, these mobile pens are simply relocated, allowing the chickens to forage as they were intended over their 12-week cycle, while providing protection from predators. 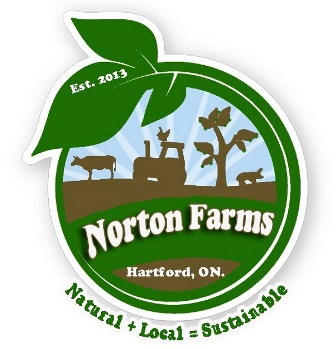 The 40 to 50 cattle are on pasture all year round and are completely grass fed.  The breeding stock is Texas Longhorn, but Ken also buys some dairy beef calves (steers) as he believes the beef-dairy cross imparts a more “delicate” flavour to the meat.  His plan is to increase the size of the herd to about 80 head eventually.

Pigs live happily at Norton Farms.  They too spend life outdoors, doing what nature intended pigs to do.   Piglets are kept with their mother, and not weaned for at least 8 weeks.  Once weaned, in addition to what nature provides the pigs are fed a (non-GMO) grain and plant-based protein feed mixed with goat milk.  They are also given large amounts of weeds and vegetables from the Nortons’ organic market garden.  The breeds are Duroc/Yorkshire, Tamworth, Berkshire and crossed Tamworth Berkshire.  As with all his livestock, Ken believes “it’s not the breed, it’s the way it’s raised” that determines the taste and texture of the finished product, and he is justly proud of the flavour, tenderness and juiciness of his pork.  By 8 to 10 months the pigs have reached their processing weight of 200 to 250 pounds.  Two or three local butchers do all of the Norton Farms processing.

Consideration for the animals’ welfare while they are on the farm is central to the Nortons’ philosophy of animal husbandry.  The livestock are never given hormones.  They only receive antibiotics if they are ill.  The sows are farrowed no more than twice a year (never in winter), and are moved to special birthing shelters as the time draws near to have their piglets.  The pigs are penned according to age and size, for their protection.

Ken purchases sows for breeding, and they are penned with T-Boar, the resident male, who has sired all the rest of the pigs currently on the farm.  The pens are moved from time to time, and the ground they previously occupied is left churned up and well fertilized.  “There’s nothing better than a pig for a plow”, Ken states emphatically.

The large, organic market garden with its 40 different varieties of vegetables, is Yuka’s responsibility. Beehives are stacked near the garden for pollination.  Currently there are twelve, but Ken and Yuka hope eventually to have about twenty.  A local beekeeper provides the hives and makes honey which, in turn, is sold in the Nortons’ market.  In the summer of 2015 there were between 70 and 80 members for their CSA veggie box program, but the decision had to be made to discontinue the boxes due to the large amount of time and labour involved.

Norton Farms meat and produce are sold at Monogram Coffee Roastery and the Nature’s Vibe store in Cambridge.  All products are available to interested customers coming directly to the Norton farm.  Those wanting to place larger orders, for example for a side of beef or half a pig, are advised to call or e-mail and pre-order.  Their order will usually be ready within a week or two.

The Nortons have turned a former workshop on their property into their on-farm store.  There, customers will find meat, produce and eggs all grown and raised by Yuka and Ken, along with the honey produced in their hives.  There are three kinds of sausage (sweet and mild Italian, and honey garlic) made by a local producer from Norton pork, and wonderful all-beef summer sausage, which is Mennonite made, from Norton cows.  They sell locally-made cider, too; and yoghurt and four varieties of cheese made locally, by Chanoki, from the milk of 100% grass-fed water buffalo.

Ken is already looking forward to the next step in the evolution of Norton Farms.  He plans to set up an on-line store, where customers can see what’s on offer and shop for what they want.  Their order will arrive at their door the next day in a cooler box, the ultimate in convenience.

As noted, Yuka tends the gardens, which are grown without the aid of any chemical fertilizers or sprays.  She is also responsible for running the farm shop, in addition to looking after a 165-year-old house and two small children.  Ken oversees all the rest, with the help of a full-time hired man and a local woman who works for them part time and, in the summer, four or five home-schooled local teens.  He calculates that he puts in about 100 hours a week – 80 of them doing farm work.  The other 20 are devoted to an unrelated business that he runs called Tri-City Office Furniture.  Like other farmers, he depends on the extra income to help meet expenses.

“It’s all about the lifestyle”, he says; he’s “not out to make a fortune”.   2015 hasn’t been an easy year.  The road passing by the farm was under construction all summer, the busiest time for visitors to the farm, and sales are off about 50% compared to last year.  There are plenty of other challenges to be faced, like when an owl bites the heads off your chickens, or a cow dies and you take a $2,000 loss or, as Ken says, “you have to go out in minus forty degree weather and hump baskets”.   There has been a steep learning curve and when he’s already working so many hours and trying to spend as much time as he can with his family, Ken finds little time to do the research and studying he would like to do.  “You can make expensive mistakes”, he says, but when mistakes are made, “no regrets, you just refocus your efforts”.  One of his beliefs is that  “making money is more important than saving money”, so he’s prepared to  spend as much as he needs to in order to achieve a good product and still make a profit in the end.

There are certainly compensations that make getting up and at it every day worth all the hard work and challenges.  Ken may have started out with only “the motivation to feed my family”, but he and Yuka are happy to be living and raising their children in the country.  The kids get to run and play freely, they all get to breathe fresh air, and Ken draws inspiration for the implications for his own future health when he sees an 85-year-old farmer neighbour who can outwork him.  He and Yuka are able to take pride in doing an honest job that does not require them to compromise their principles of producing delicious, nourishing food “sustainably and healthfully without compromising the ability of future generations to do the same”.

Ken’s overarching goal is that “middle class people should be able to eat well, and do so more affordably”.   He would like to see farmers making an effort to work more cooperatively “to get their products into the mouths of consumers”.  He believes future food security depends upon there being more farmers, and to that end would hope to see the Ministry of Agriculture set up incentives and programs to assist young people who would like to farm but don’t have the capital to buy land.

In the feeding of all his livestock, Ken keeps something he once read firmly in mind, as he and Yuka strive to maintain the quality and taste of the food they feed their family and share with the community.  “It’s not what you eat”, he says, “it’s what you eat eats”.  Every time someone visits Norton Farms Ken and Yuka consider it an opportunity to demonstrate how food can be grown sustainably, healthfully and with concern for animal welfare, and that it really matters.  They particularly welcome children, believing it’s a chance to help educate the next generation of food consumers.

Ken and Yuka Norton have succeeded in creating a unique ecosystem on their farm.  It is something to be seen, and the good food produced there is definitely something wonderful to be tasted.  When asked if he feels they’ve been able to achieve what they set out to Ken provides an anecdote.  An 89-year-old woman came into the shop with her daughter and bought some beef.  Mother and daughter returned a couple of weeks later, and the elderly woman said about the beef, “That’s just the way it tasted when I was a little girl”.  “That’s the best indicator of success I’ve had so far”, he says.  In other words Ken Norton can be satisfied that what he and Yuka are producing at Norton Farms is not “supermarket food”.